According to Chainalysis data the number of DEX’s doubled between Q1 2019 and Q3 2021, while the amount of CEX’s stayed around the same.

Chainalysis published a report on crypto exchanges on Nov. 11 and provided an analysis by breaking the exchanges down by their business models including DEXs, CEXs, over-the-counter (OTC) brokers, derivatives platforms and high-risk exchanges with minimal know your customer (KYC) requirements.

According to the data, the number of DEX’s between Q1 2019 and Q3 2021 increased more than 100% to sit at around 205 as of June this year. In comparison, the number of CEX’s temporarily increased from around 100 to 120, before dipping back to the 100 region within that time frame.

The amount of OTC brokers also increased significantly, gaining around 50% to sit at the 150 mark in Q3 2021. The number of derivatives exchanges got a slight bump to around 125 in 2019, and has essentially held at the region since, while high-risk exchanges broke out during the middle of 2020 to around the 150 mark, before sharply dropping below 100 in Q3 2021.

“Of course, the number of active exchanges in each category isn’t the only way to judge the health of those categories. After all, cryptocurrency businesses aren’t simply trying to survive — they need to grow their userbases and transaction volumes in order to thrive,” the report said.

Across all categories however, the number of small exchanges has dropped, suggesting the exchange market can no longer support niche players. The lesson? Exchanges need to reach a mass audience, or a small audience of large-scale traders, in order to stay in business.

Chainalysis emphasized that the growing popularity of DEXs over the past two years has coincided with the “explosive growth of the DeFi category in general.” The firm highlighted that the total value received by DEX’s grew from around $10 billion in July 2020 to a peak of $368 million in May 2021, marking an increase of roughly 3579%.

Binance is still the top dog

Despite facing intense scrutiny and pushback from regulators across the globe in recent months, data shows that the centralized exchange Binance still towers over its competitors.

According to data from Similar Web compiled by Finbold, Binance had the most web traffic out of all crypto exchanges in October with a total of 171 million visitors. The figure represents a 12% increase compared to the month before. Coinbase ranks second with 91 million visitors last month, and had a 31% surge in traffic compared to the month before.

Notably the third most popular exchange is PancakeSwap, a DEX that operates on the Binance Smart Chain, with 25 million visitors and a 14% month-over-month increase. While Bybit sits at fourth with 24 million (down 8% from September).

Coingecko data shows that Binance is well ahead of its competitors in terms of volume, with the platform seeing more than $33.3 billion over the past 24 hours. That figure is more than five times larger than the total of second-ranked Coinbase, which generated $6.6 billion worth of 24-volume.

On Thursday the Wall Street Journal reported that former Binance executives estimated that the firm could be worth up to $300 billion as a publicly-traded company. It is unclear when or how Binance will go public, considering its lack of a formal headquarters. However, CEO Changpeng Zhao said in September the Binance’s U.S. branch was looking at an initial public offering (IPO) in 2024. Rising U.S. inflation and overblown fears about Evergrande contagion might be factors behind BTC’s recent pullback, but most analysts view the drop as a “necessary retest.”

Volatility is the name of the game in the cryptocurrency market and the Nov. 11 evening sell-off in the price of Bitcoin (BTC) is a reminder that new all-time highs are often followed by sharp whipsaws to underlying support levels.

Data from Cointelegraph Markets Pro and TradingView shows that after dropping to a low near $62,800 late on Nov. 10, the price of Bitcoin managed to claw its way back up to the $65,000 level where bulls now look to consolidate and regroup for another push higher.

Here’s a look at what analysts are saying about the outlook for Bitcoin and the cryptocurrency market as concerns about rising inflation dominate the news headlines in the U.S.

The sight of a rapid $7,000 decline in BTC may have come as a shock to some, but for analyst and pseudonymous Twitter user ‘Nunya Bizniz’, the price action over the past couple of days is par for the course and transitory in nature based on Bitcoin’s past performance.

As observed in the chart below which shows the Bitcoin price along with its 20-day moving average (20-MA), it’s common for a run-up in the price of BTC to be followed by a pullback that touches or briefly dips below the 20-MA before once again heading higher.

Evergrande and inflation affect the market

Insight into the macro factors at play was provided by Jean-Marc Bonnefous, head of asset management at Tellurian ExoAlpha, who highlighted the fact that “there has been much talk about the impact of the Evergrande story on the recent sell-off in the market.”

As a way to make the development more relatable to cryptocurrency holders, Bonnefos stated that the “Evergrande news is to equities what Elon Musk tweets are to cryptos” in that it is “somewhat manipulated news to move markets.”

According to Bonnefos, “the crypto markets seem to be overreacting” to the headlines, and “the recent dip is probably more of a technical consolidation after the sharp rally of the last few days.”

And it’s not just negative headlines about Evergrande and tweets from influencers that are affecting the price action in the crypto market. According to Bonnefos, the recent 6.2% rise in the U.S. Consumer Price Index (CPI) also points to a major factor influencing the global financial markets and the price of Bitcoin.

“The recent shocking inflation numbers in the U.S. should be a supportive fundamental driver for Bitcoin prices, beyond the short term tactical selling pressure.”

Bitcoin is in the process of a necessary retest

A final word of encouragement was offered by analyst Twitter user ‘GalaxyBTC’, who posted the following chart outlining one possible trajectory for the price of BTC to reach $75,000 in the short-term.

“Yesterday’s retest was needed to continue the bull run in a healthy manner. I think we will start pumping harder now.” Blockchain documentation service Transcrypts announced a partnership with the humanitarian organization on Thursday.

At a November 11 press conference, blockchain- based document security company Transcrypts announced a partnership with Doctors Without Borders, or DWB, that began on October 14th. Working together, they have already uploaded 6500 immunization records to the blockchain, with a goal of 76000 by 2022.

Most of the recorded immunizations are COVID 19 vaccines, but the company stated that the eventually the goal is to store all patient medical records on the blockchain, where they will be accessible from a patient’s phone. The nascent California based startup was founded last year by Zain Zaidi — then still an electrical engineering student at San Jose State University. The company now counts Paychex, ADP, Zoom, Spirit Airlines and Oracle as its clients.

Transcrypts began as a tool to combat resume fraud marketed to human resources professionals, before expanding into income verification for landlords. Now, the firm said that it views itself as a full service documentation service. The DWB partnership is its first foray into medical records. Previously Transcrypt had found that HIPAA and other compliance laws essentially barred blockchain as an acceptable method of storage for medical records within the United States.

Speaking on the accessibility of patient medical records in developing nations, Zaidi said that blockchain could provide significant help in preventing many unnecessary deaths:

“In India over 700,000 people die every year from the lack of access to a patient’s medical records. A majority of these deaths could have been prevented if physicians had access to a patient’s comprehensive health care records. With this partnership, Doctors Without Borders and TransCrypts hopes to build a future where this loss of life can be mitigated.”

This is not the first time COVID vaccination records have been stored on the blockchain. Cointelegraph reported in January about veChain’s launch of a program to do so at a large hospital in Cyprus. The company estimates the completed U.S. facilities will be able to produce 3.7 Bitcoin daily at a cost of roughly $4,000 per BTC.

Canadian Bitcoin mining company Bitfarms is planning to build its first data center in the United States following the purchase of a land plot in Washington State.

In a Nov. 11 announcement, Bitfarms said it aimed to establish mining operations in the U.S. capable of 620 petahashes per second using 6,200 Bitmain rigs fully powered by hydroelectric energy. The firm has already purchased a 24 megawatt hydro power farm in Washington for $26 million, but plans to expand to 99 MW by developing additional farms in the area.

Bitfarms CEO Emiliano Grodzki said the firm had chosen Washington for its “cost-effective electricity” and production rates. With the addition of the 24 MW data center, the company currently has a total mining capacity of 106 MW, but estimates the completed facilities will be able to produce 3.7 Bitcoin (BTC) daily at a cost of roughly $4,000 per BTC — at the current BTC price of $65,000, this would mean roughly $183,000 in profit daily.

At a time when many are citing the potential environmental impact of crypto mining, Bitfarms claims its facilities in Canada are powered almost entirely by hydroelectric energy. Cointelegraph previously reported that Bitfarms had doubled its monthly crypto mining productivity between January and July, mining 199 BTC and 400 BTC, respectively, potentially as a result of the crackdown on miners in China.

According to the mining firm, it currently has 10 farms in operation or under development in countries including the United States, Argentina, and Canada. At the time of publication, Bitfarms claims a mining capacity of 82 MW at 1.8 exahashes per second. 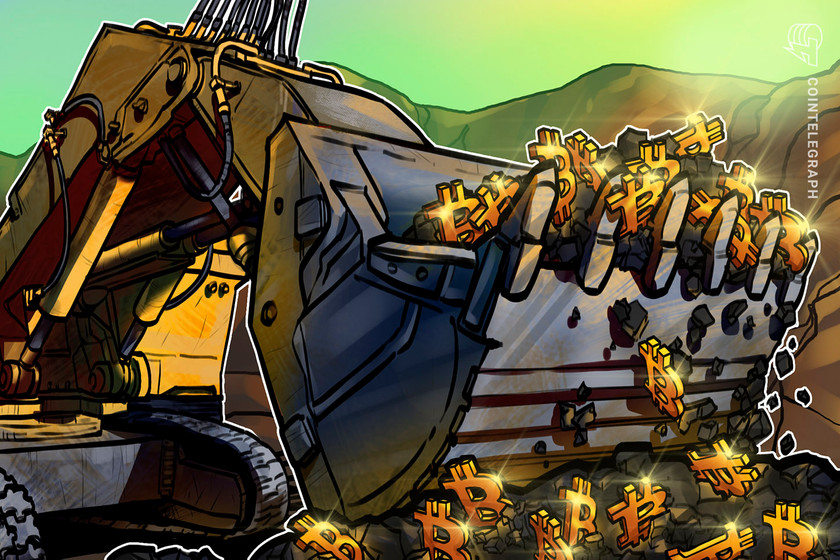 According to the firm, it mines close to 20 BTC per day.

In its third-quarter earnings release, Canadian cryptocurrency miner Hut8 announced that it surpassed the goal set earlier this year of holding 5,000 Bitcoins (BTC) in reserves through mining. Its Bitcoin balance now amounts to 5,053, for a total market value of $430 million.

The company’s total hash rate (Bitcoin and Ethereum mining combined), or the number of guesses per second needed to obtain a mathematical solution to mine a new block on a proof-of-work blockchain, amounts to 1.7 exahashes per second (1.7*10^18 hashes/s, EH/s). In context, the total hash rate of the entire Bitcoin network is 162 EH/s, according to data provided by Blockchain.com. As for Ethereum, that number stands at 817.06 terahashes per second (817.06*10^12 hashes/s, TH/s), according to data provided by 2Miners.com. The firm’s contracted mining capacity for Ethereum stands at 1.6 TH/s.

Hut 8 adopts a hold-on-for-dear-life, or HODL, strategy when it comes to mining Bitcoin; that is, it does not seek to sell them under most circumstances. The firm also lends out its BTC to farm yields, and claims to mine close to 20 BTC per day.

The company operates in the Canadian province of Alberta with plans to expand to Ontario. It uses a mixture of natural gas, wind and green energy for its mining operations.